Melanie Robinson is currently studying BSc Architectural Technology at Edinburgh Napier and is also one of the Student Champions for Connect this year.  Melanie has written about our recent site visit:

On Wednesday 12th November, women from the School of Engineering and Built Environment got the chance to visit the construction site at 110 Queen Street, led by BAM Construction.

The project we got to visit is a glass panel clad office complex with retail space. It is designed to incorporate a smooth concave finish which contrasts nicely with the traditional buildings which surround it. It has now reached a stage where the structure is fully formed and the unitised glass panels are in the process of being fitted.

Before we donned our hard hats, work boots and high vis jackets, we got an introductory presentation by one of the Project Managers on site. The presentation documented the construction to date, and included architectural videos which showed all stages, from the demolition of the existing building to pouring the in-situ concrete floors using table forms.

We also saw a time lapse of a staggeringly high tower luffing jib crane being assembled in three parts on the site. As the building grew in the videos, the crane seemed to become engulfed in the development. It’s central position on site optimised use of space without encroaching on neighbouring properties, and serves as a central point for the running of the entire project.

110 Queen Street is also serving as a guinea pig for implementation of BIM within BAM’s practice. In a project this scale, utilising BIM is proving to be a great success by limiting the amount of time being spent on administration. Instead, internet based software is allowing the Managers to track the progress of the construction whilst having access to a database with all documents and communication, including architect’s drawings and 3D models. Integrated camera technology also supports the software by making it easier for the team to report problems. Currently, 3 tablets are being used on site for this purpose.

We were first taken into the basement which is currently being used by BAM as a storage facility. The whole development seemed to be alive with the buzz of activity, even down this low. As we ascended, each floor was at a different stage in its construction. One had just installed the sprinkler system, one was ready for the suspended ceiling to be installed, and others were still lying empty with bare, fresh concrete surfaces.

The glass panels were being installed in one floor as we were there, with the first unit having been installed in August. Almost 600 panels are being used in total. Each panel was being installed with care and consideration, ensuring precision and watertightness, and are connected to the slabs using a hooking system to prevent movement.

Our last stop on the tour was the nine-storey high roof. The luffing jib crane was now completely covered with only its head visible. The views of Glasgow were rewarding. Despite the fluctuating rain levels, we were rewarded with a sunny cityscape, with many more tower cranes being erected and in motion around the city. It was a refreshing view, emulating the increase in projects for the construction industry which is only just recovering from the recession.

All in all, it was a valuable day out and an opportunity to apply our academic knowledge to an industry situation. On behalf of Connect, I would like to thank BAM for their accommodation and their expertly led tour. As women trying to break into a male-dominated world, it is rare to have such an insight into the built environment but BAM ensured we had a valuable experience from beginning to end. 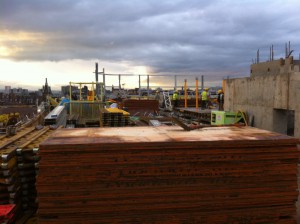